If we were living in normal times I would’ve been writing about current events on my blog as a way of processing and inviting conversation. Instead I’ve been deliberately silent.

I stayed silent because so many people are strongly and poignantly expressing the collective horror, sadness and outrage that I also feel over the murder of George Floyd and the countless other black men and women dying from injustice.

Because I respect the need to center Black voices in the ongoing struggle against racism, I have retweeted, reposted and amplified to my admittedly small circle.

I am doing what I can, where I can, when I can and I know I can do better. I committed long ago to challenge my biases, to engage other white people around race, to work to dismantle systemic oppression, and to broaden the conversation about DEI.

What’s prompting me to write now is the wave of despair I feel witnessing relentless Calling Out against allies because they are not devoting 100% of their attention to anti-racism 100% of the time.

There is legitimate and undisputed need for anti-black racism to remain in the public awareness through news, social media and active protest.  American citizens habitually lose interest and look away when a tragedy dominates the news cycle for “too long”. So we know that it’s essential that people don’t move on when nothing has yet changed.

But what is gained by Calling Out or shaming an ally for posting on Insta or Twitter about something significant in their life not connected to racism?

I’m not talking about influencers taking a #BLM selfie for product placement, or celebrities making tone-deaf, self-serving public statements, I’m talking about people who have committed to being non-performative advocates and allies willing to own all of their flaws & mistakes along the way.

I know that allyship is in the eye of the beholder, but I fear that so much calling out & attacking will lead to shame and inaction.

It’s a big leap for some folks to even realize that all Black people are not aligned on how white allies should engage.

The conflicting messages are, in fact, the first part of the learning. Feeling uncertainty and discomfort about doing or saying the wrong thing is baseline for personal growth.

Calling someone out is easy on Twitter/Insta/FaceBook. Calling someone In is harder and takes more time. It’s that same immediacy that causes us to withhold the grace for others mistakes that we often have in person.

Our society appears to be increasingly susceptible to polarization and absolutes rather than nuance. This is nowhere more apparent than on the internet where “with us or against us” is now signaled by a persons willingness to wear a mask during a pandemic.

The calls for justice for George Floyd, Breonna Taylor, Ahmaud Arbery and others, criminal justice reform, and defunding police/refunding the community have caused some people on social media to adopt a “with us or against us” attitude toward posting.

Some folks are viewing any deviation from anti-racist content on social media as grounds for attacking the sincerity of the supposed ally’s commitment to anti-racism. That requirement moves allyship from an ongoing process of learning about and taking action against oppression (my definition) to an impossible place of never messing up and never posting about anything other than racism.

I know I can’t live up to that measure on social media, in my work or in my life. I don’t abandon my allyship because of fatigue or because as a white cis-gender woman I have the privilege of ignoring racism. But I reserve the right to have the fullness of life – the sorrow and the joy, the horror and the beauty, the serious and the frivolous.

I was thinking of the Emma Goldman quote “If I can’t dance I don’t want to be part of your revolution” as I scrolled through various attacks and subsequent mea culpas social media. We have a framed print by the activist artist Ricardo Levins Morales in our house to remind us of the fullness of life.

We have another print included below that illustrates a quote by the labor activist Rose Schneiderman that I read daily. It is my prayer for the world – that we will all have the right to life, and the sun, and music and art. That we all have bread and roses.

But first we need to find faith in each other and a little grace. 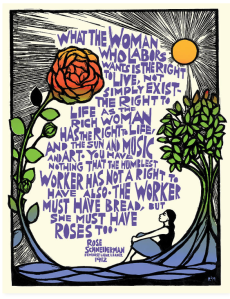 Amanda is a somewhat inconsistent blogger on the topics of feminism, coaching, personal growth and current events.

Is There Something On My Face?

An Indigenous Woman's Experience in Anthropology

What About Our Daughters