I was forced to buy a new wallet recently. I don’t invest much in accessories like wallets, handbags, phone cases and such so this doesn’t happen very often. I think this might be the fourth or fifth wallet I’ve owned in my lifetime. All my previous wallets has slots for school photos. Which I sort of miss.

Cleaning out the old wallet, which had considerably more nooks and crannies than the new one, I found something my mother gave me back in 1991.

My mom was a religious person, a person of faith, and a big believer in miracles. Back in 1991, the year before my dad was diagnosed with the cancer that would kill him a year later, I was in a place of flux.

When I was laid off from the theatre I worked at for years, I took a job as a temp for a publisher. Within months I was hired full-time and was making more money than I had ever made  in theatre. I think the salary was a whopping $18,000.

Seeing as this was thousands of dollars more than I earned in theatre, I actually paid down my looming debt and felt “rich”. I had savings for the first time in my life and still managed to act and direct  at night. The stamina of youth + coffee.

In 1991 I was weighing the decision to return to a theatre position full-time, which I ultimately did. Sitting at my moms kitchen table obviously moaning about money worries and trying to decide between what was safe and what was authentic, she pulled out a piece of paper and wrote me a note.

It said “Pay to the Order of Amanda T. Shaffer. Paid in Full. The Law of Abundance.” She dated it, had me sign it and told me to carry it in my wallet always.

I don’t know if her talisman worked but the next year I met Mr. Man who became my friend and husband, and the years following the abundance flowed – I founded a theatre, bought a house, had a child and continued to find interesting, fulfilling work in and out of theatre for the next 25 years.

There were many dips in the road, losing my dad in 1992, and then mom in 2001. Followed by the death of my brother, my husbands grandparents, and my father-in-law. But the abundance and richness of my life has never dimmed. And I am grateful.

Sunday was the anniversary of my mom’s death and I am still vaguely surprised by it every year. So I was happy to find the tattered paper talisman she gifted me with – dated on what would be my daughters birthday eight years in the future – and put it in my new wallet.

Where I will carry it always. 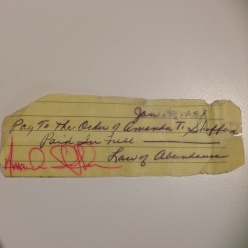