The street where I grew up boasted a soft serve ice cream stand on the corner called Gigi’s.

At Gigi’s you could get vanilla, chocolate or, my favorite, a twist cone (why choose when you can have both?) with dip coating, which was extra and a rare splurge.

I never really liked the glassy hard coating that made eating your ice cream difficult and drippy, but I always wanted it. It seemed so fancy to have something “extra” on your cone. You could also get your ice cream rolled in chopped peanuts but that seemed like something invented by adults just to ruin a good time.

My mom didn’t eat ice cream from Gigi’s because she said it was “dirty” and she thought they had cockroaches. I don’t know why she thought that or if she had proof, but begging for money to get a cone always included her unsolicited opinion that “That place is dirty”.

Maybe it was, but what did we care.

The guy who owned it, and named it after his daughter who preened about the fact, converted his garage into a tiny stand with one window and a ledge to lean on while you waited to be served.

The most satisfying way to enjoy a cone from Gigi’s was on the way home from the public pool, exhausted from sun and chlorine and six straight hours of “horse-play” and diving for pennies. Countless summer days my mother sent us to the pool when it opened at noon and we stayed until they kicked all the kids out at 6pm.

Gigi’s was between the pool and home which meant the cone that was sure to ruin your dinner had to be eaten sitting on the downed telephone pole in the empty lot just off the corner. The house next to the lot had bushes so no one (my mom and her neighbor cronies specifically) could see you sitting on the telephone pole eating a pre-dinner ice cream.

I stopped going to Gigi’s as I got older after a few creepy encounters with the men outside Danny’s beverage. You had to pass through the beverage store parking lot on the corner to get to Gigi’s. It was a low-tech drive up place where young guys sitting on beer crates would hop up and bring your order to you while you waited in the car.

The guys on crates, and the old men in lawn chairs who ran the place, sat out front smoking all day. Once I hit puberty they started to make cracks about my body and all the ice cream in the world wouldn’t persuade me to cross that lot anymore.

Now, at least once a year, I take my daughter to get a soft serve ice cream. The stand I found is on the way home from the beach, is not at all “dirty”, and is run by teenagers just like a good ice cream stand should be.

The selections are many.

No longer is there just chocolate, butterscotch and cherry dip coating, (god bless you Red Dye #40) but now you can also have strawberry, blue raspberry and peanut butter. It’s still extra. And I still get it even though I don’t really like it. 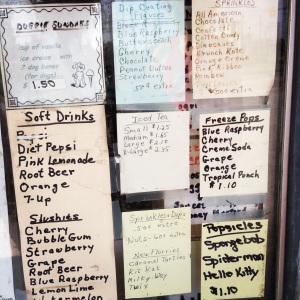