Searching desperately through 99,000 emails for one that I know I saved, I discovered something a friend sent after we left a particularly long strategic planning session, several strategic plans ago.

I really need to delete some emails if for nothing else than to avoid being reminded that I sometimes find myself in a hamster wheel. The author was not included so let call them “Internet” rather than “Anon”.

1. In the beginning was the Plan.

2. And then came the Assumptions.

3. And the Assumptions were without form.

4. And the Plan was without Substance.

5. And darkness was upon the face of the Workers.

6. And Workers spoke among themselves saying, “It is a crock of shit and it stinks.”

7. And Workers went unto their Supervisors and said, “It is a crock of dung and we cannot live with the smell.”

8. And Supervisors went unto their Managers saying, “It is a container of organic waste, and it is very strong, such that none may abide by it.”

9. And Managers went unto their Directors, saying, “It is a vessel of fertilizer, and none may abide its strength.”

10. And Directors spoke among themselves, saying to one another; “It contains that which aids plant growth, and it is very strong.”

11. And Directors went to Vice-Presidents, saying unto them, “It promotes growth, and it is very powerful.”

12. And Vice Presidents went to the President, saying unto him “It has very powerful effects.”

13. And the President looked upon the Plan and saw that it was good.

I grew up reading – and still own –  the “Little Wide Awake: An Anthology of Victorian Children’s Books and Periodicals in the Collection of Anne and Fernand G. Reiner Selected by Leonard De Vries.” The Corporate Verse above would fit perfectly with the severe moral lessons in the book.

This page doesn’t really capture the effect of woodcut images of children being whipped by school masters or starving to death in the streets, but you get the idea. 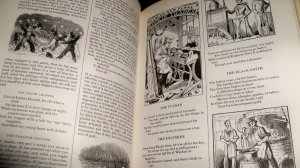