We bought a couch the other day. My husband and I went to a furniture store and left after we had purchased a couch rather than before. It’s not as if we had never shopped for a couch before, this was just the first time we made it to the buying.

We had a marginally acceptable apartment size couch we got off Craigslist for $50 as a temporary fix when we found ourselves without a couch.  A stop-gap until we could buy a “real couch” by which I mean a couch that more than two people could sit on at one time.

That was nine years ago.

The couch was upholstered in an unfortunate shade of electric blue by someone with intermediate rather than expert skills, so the cushion didn’t fit properly and the upholstery tacks were the wrong size & style. No matter I am a wiz at slipcovers so I made it work. Then the slipcover started tearing because the material had worn thin. Yes it was the same slipcover for nine years. So I made do with a twin sheet over the cushion, and it was still serviceable.

Anyone who is or has been married knows compromise is the name of the game. For nine years my husband and I could not compromise and agree on a couch. Style, cost, color, size, fabric – there was no middle ground. When we went shopping this last time we had reached the same impasse when suddenly we found something that looked nice (my requirement), felt comfy (his requirement), had enough space for us both to read on, (mutual requirement), and it was on deep discount sale.

When we agreed this was the one, my husband grabbed the saleslady and purchased it immediately before either of us could change our minds. Magically, when it arrived we had not deceived ourselves and it was everything we had wanted. Most importantly the style fit the rest of the house so I didn’t have a domino of “now I have to upgrade the …”.

Maybe now we are ready to pick out a china pattern. The stop-gap for that (17 years ago) was plain white plates… 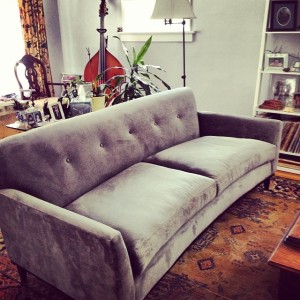