As I get older it gets harder to recover from late nights and too little sleep.

Sleep is one of those things that gets to be a habit. Your body gets used to being well rested and protests when its not. It may have been a better strategy for me to fight the impulse to rest when tired in order to reduce the backlash when its not available. But that horse has left the barn.

For many years I worked 6 – 7 days a week up to 16 hours a day. I never understood when people said things like “I can’t drink coffee after 11 am or it keeps me up at night.” I could drink a pot of coffee and fall asleep 30 minutes later if there was a flat surface and a blanket. What I didn’t realize until I had a health issue that cut off my coffee cold-turkey for 2 weeks, and then limited me to one cup a day, was that coffee plus willpower was all that was holding me up.

My habit at the time of drinking roughly four pots of coffee during the day, forced me to embrace the letter my new coffee law by buying a very large mug that held a 4-cup serving. My name is Amanda and I am a coffee addict. Much, much reduced now, but a beloved crutch nonetheless.

Now the only recourse is trickery. Last night I was up until 1 am writing a proposal and then started the day at 5:30. I have many more of these looming on the horizon which requires a dip into the makeup bag for camo. My Pixi stick will now live in my briefcase rather than the bathroom.

The Pixi stick is the only concealer that has ever done anything to combat the dark circles that live under my eyes. The circles, hereditary + lack of sleep, look exponentially worse when hidden by creamy foundation type concealers. This was a problem a while back when I woke up with a black eye and needed to go to work. My magic Pixi stick however, which is a nude eyeliner that I put on my inner lid, instantly creates the illusion of white, bright eyes.

Every time I use my camo Pixi stick I remember how during my extended punk phase I would sharpen black eye liner, heat it with a match, and then line both the inner and outer part of my eye for the full raccoon. 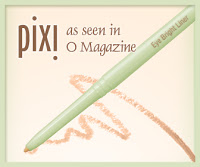 A picture of my new favorite product.
Apparently Gayle & Oprah like it too.

Amanda is a somewhat inconsistent blogger on the topics of feminism, coaching, personal growth and current events.

I VOTED. YOUR TURN.

Is There Something On My Face?

An Indigenous Woman's Experience in Anthropology

What About Our Daughters