Skip to content
I know I jokingly put up a photo of my cat and a cake the other day because google stats for cat photos and cooking blogs are insane, but now I really am writing about my cat. My other cat Terry, the younger, more affectionate one, had an emergency run to the vet to get a wound stitched. Also known as a “small surgery” which seems to better justify the size of the check you write.

The downside of having pets is that they can’t talk, I mean really talk not just communicate, so you are in the dark when they are in pain. Terry can’t tell us how or when he acquired the mystery cut, he didn’t tell us he was in pain and needed to go to emergency, and we sure couldn’t explain what those people were going to do to him when they pulled out the clippers and held him down.

It’s a helpless feeling, similar to what you experience when a child is pre-verbal, which is probably why so many people treat their pets like children. Trying to read behavioral signals can be difficult, frustrating, panic-inducing and can lead to self-recriminations as if a colicky baby (or wounded pet) is a sign of poor parenting.

I was so happy when my daughter learned to talk around her first birthday. Now if we can just teach the cats to talk. Or even type. They do seem attracted to keyboards, or at least mine are when I am working at home.

Years ago when I was moving my old cat Sasha somehow got out of my apartment building and was missing for a few days. I was distraught and told a guy I worked with at the time and he said “Its just a cat, what does it matter?” Maybe he was a dog person (I grew up having a dog myself), or maybe he was trying to act cool, but I was flabbergasted and hurt. I see him around occasionally and when I do I’m always tempted, now that he has a kid and a dog, to ask him how he feels about pets now.

Pets and children are complicated responsibilities. Some people treat their pets like children and their children like strangers. Some people treat animals as if they are disposable. I heard an awful story about how many French people abandon their pets every year when they leave for vacation. Leave them in the streets or drop them off at shelters. Can you imagine having your pet euthanized because you don’t want to pay for boarding or house sitting for a month? Neither can I.

I don’t remember pets being covered in the “wisdom of French parenting” hype, I wonder how that fits into the authoritative, patient, parenting model currently being admired? 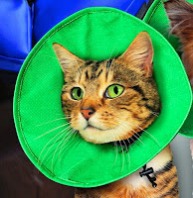 My sweet but uncommunicative kitty will be fine even as he suffers the indignity of a kitty cone that makes him look like a space alien. My hyper-communicative kid will also be fine as she has to help care for Terry and give him his antibiotics, and get woken up by the rustling of his plastic cone in the middle of the night. I think compassion and care-taking are lessons as valuable as the delayed-gratification Druckerman admires in her Gallic friends.

A curious side note to this episode: When the vet gave us the antibiotics for the cat, to be administered twice a day for 7 days, she said “This tastes terrible and the cats hate it”. Huh? You know that and you can’t come up with some anchovy flavor or something? Makes the whole process even worse – let me hold you tightly, force open your mouth, stick a dropper down the back of your throat and feed you this nasty white medicine that you will attempt to spit out. Something is wrong with this picture.

That is not my cat by the way, just an example of comfy kitty cone which seems less cruel than the hard plastic kind when they have to wear it for 7 days.