We took a short, fast vacation to visit family over the recent holiday weekend (95% of our vacations are to family), and we had a bit of an adventure.

It was an 8 hour drive to our destination. As is our tradition, my husband drove while my daughter and I read books. I can read continuously but my husband gets motion sickness, hence the unequal distribution of driving. Our daughter can read for a while and then she takes a break to listen to her iPod and text friends.

During one of these breaks from reading she decided to lay down on the back seat. Having grown up pre-Ralph Nader (meaning we had no seat belts and would sit curled up in the well or sprawled over each other) her lying down in the back didn’t bother me in the least. Seeing as she was raised post-Ralph Nader, my daughter dutifully had her seat belt on while she reclined. At some point she sat up and was tangled in the belt so she unhooked it and tried to untangle which caused the belt to lock. So she pulled on it. And pulled on it some more. And then she told us there was a problem.

The problem, which from the front seat looked like she needed help getting out of a tangle, was actually that the seat belt was now a slip knot around her waist. All her efforts to fix it before she told us there was a problem meant most of the belt had retracted and was tightening around her waist.

We pulled off the interstate and tried to extract her but the loop was too tight to go either up or down her body. So I sat with her in the back holding the strap so it wouldn’t tighten anymore as she got more and more freaked out. We thought we could get a socket wrench and free her so we stopped at a gas station to see if anyone had tools.

Amazingly no one driving a pick up truck had a toolbox with them. Go figure.

The cashier had a double ended wrench which promptly broke when my husband tried to loosen the bolt. To be honest it looked like it was made out of aluminum and was probably designed to tighten bicycle tires. At that point, amidst tears and hyperventilating, we cut the strap.

The strap cutting took 10 seconds compared to the 45 minutes of trying to free her without maiming the new car. And we used the paranoia tool my mother-in-law gave us years ago.

Being a QVC shopper and a big believer in disaster preparedness, my mother-in-law has gifted us with more than one paranoia tool. This one was designed to break the windshield and cut the seat belt of a car that is submerging in water.

I had doubts that we would ever be in a car crash that involved a body of water, but I dutifully placed it in the glove box. If nothing else that pointy end looked like it could do serious damage to the temple of a car jacker, which is about 500 times more likely if only slightly less paranoid.

The coda to the story is that when I took it to get repaired the belt cost $110 with an additional $400 for labor. Still a bargain compared to the alternative. When I asked the service man to check out the belt to make sure it didnt happen again, they came back and said they would replace it for free as a good will gesture.

I was very grateful. And, cynic that I am, assume that I will hear about a mandatory recall for second row seat belts in a few months. Alls well that ends well.

And a little Johnny Cash to put it all in perspective. 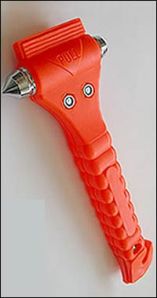